I need help with following questions, but passage is above in a picture form. Thanks. Legacy/Children... 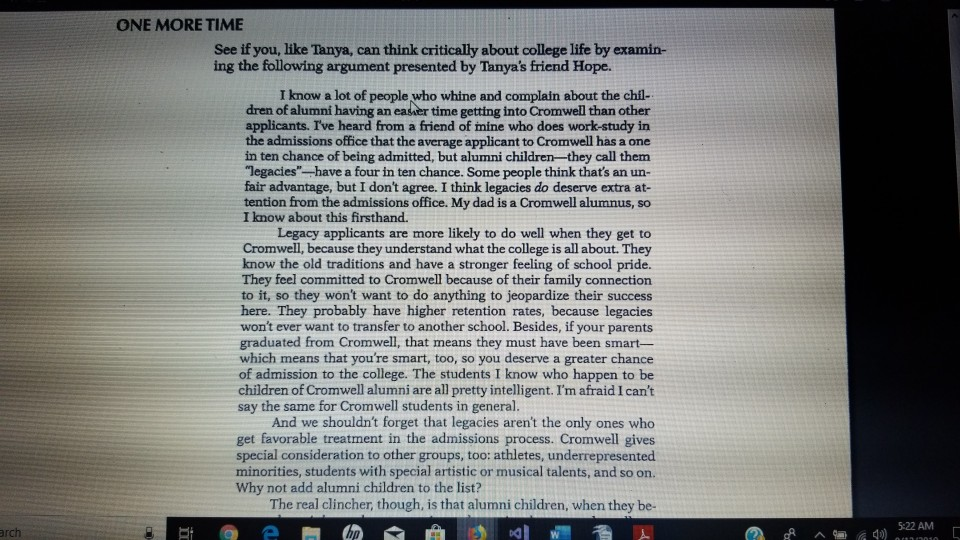 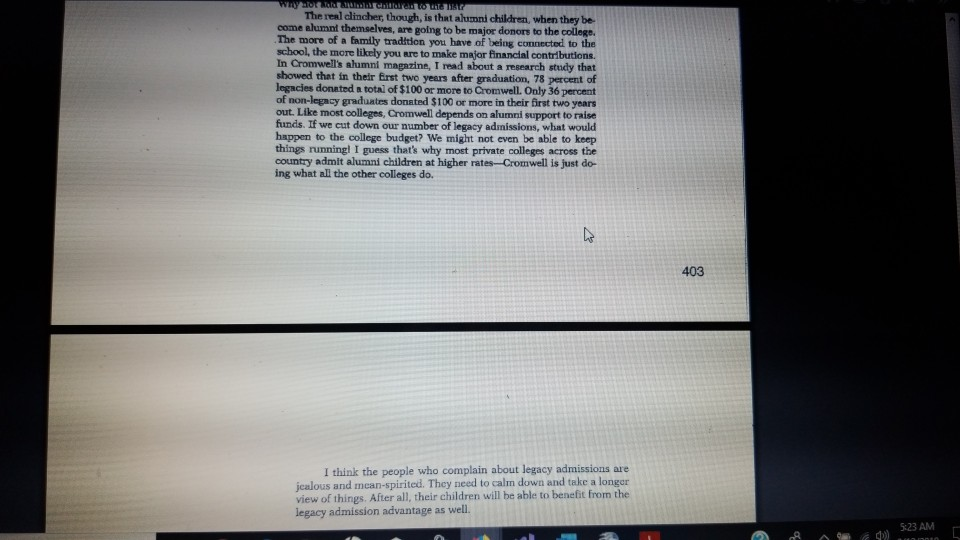 I need help with following questions, but passage is above in a picture form. Thanks.

Instructions:
Read all of Chapter 9a.   Then answer questions 1-8 below in number format on the short story entitled “ONE MORE TIME” about Legacies/Children of Alumni on p. 403.    To make sure you have the correct story, it begins with “I know a lot of people who whine and complain about the children of alumni…..”

1. What’s the issue at hand (question at issue)?

b. Is there a factual basis to the claims? Why or why not?

c.What kind of evidence is being provided in support of the claims?

d. Is the use of statistics or other numerical evidence credible?

4. How credible is the speaker as well as the sources cited?

5. What assumptions are underlying any claims being made? (at least 3 + assumptions)

6. Is the language that is being used loaded or slanted in any way? (at least 3 +)

7. Are there any logical fallacies (pp. 396-399) in the argument? (you need to find at least 6+ fallacies). You need to identify which sentences in the story are fallacies and specify which fallacy (or fallacies) they violate. For example:

“If we cut down on the number of legacy admissions, what would happen to the college budget? We might not even be able to keep things running!” Slippery Slope


8. Is there anything important being left out of the presentation?

To help you answer the questions, you will need to read Chapter 9a


ONE MORE TIME See if you, like Tanya, can think critically about college life by examin- ing the following argument presented by Tanya's friend Hope. I know a lot of people who whine and complain about the chil- dren of alumni having an easer time getting into Cromwell than other applicants. I've heard from a friend of mine who does work-study in the admissions office that the average applicant to Cromwell has a one in ten chance of being admitted, but alumni children-they call them legacies" have a four in ten chance. Some people think that's an un- fair advantage, but I don't agree. I think legacies do deserve extra at- tention from the admissions office. My dad is a Cromwell alumnus, so I know about this firsthand. Legacy applicants are more likely to do well when they get to Cromwell, because they understand what the college is all about. They know the old traditions and have a stronger feeling of school pride. They feel committed to Cromwell because of their family connection to it, so they won't want to do anything to jeopardize their success here. They probably have higher retention rates, because legacies won't ever want to transfer to another school. Besides, if your parents graduated from Cromwell, that means they must have been smart- which means that you're smart, too, so you deserve a greater chance of admission to the college. The students I know who happen to be children of Cromwell alumni are all pretty intelligent. I'm afraid I can't say the same for Cromwell students in general. And we shouldn't forget that legacies aren't the only ones who get favorable treatment in the admissions process. Cromwell gives special consideration to other groups, too: athletes, underrepresented minorities, students with special artistic or musical talents, and so on Why not add alumni children to the list? The real clincher, though, is that alumni children, when they be . 5:22 AM arch hp
Why aor ad antla Chitfalren to e iar The real clincher, though, is that alumni children, when they be- come alumni themselves, are golng to be major donors to the college. .The more of a Eamily tradition you have of being connected to the school, the more likely you are to make majar financial contributions. In Cromwell's alumni magazine, I read about a research study that showed that in their Erst two years after graduation, 78 percent of legacies donated a total of $100 or more to Cromwell. Only 36 percent of non-legacy graduates donated $100 or more in their first two years out. Like most colleges, Cromwell depends on alumni support to raise funds. If we cut down our number of legacy admissions, what would happen to the college budget? We might not even be able to keep things running! I guess that's why most private colleges across the country admlt alumni children at higher rates-Cromwell is just do- ing what all the other colleges do. 403 I think the people who complain about legacy admissions are jealous and mean-spirited. They need to calm down and take a longer view of things. After all, their children will be able to benefit from the legacy admission advantage as well. 5:23 AM
Business Economics
< Previous
Next >

Consider the standard Bertrand model of price competition. There are two firms that produce a homogenous...

consider the standard Bertrand model of price competition. There are two firms that produce a homogenous good with the same constant marginal cost of c. a) Suppose that the rule for splitting up cunsumers when the prices are equal assigns all consumers to firm1 when both firms charge the same price....
Read question...
1 answer

QUESTION 49 In terms of revenues and costs for a project, which of the statements below...

Try to use the definition of uniformly continuous to prove this question, thank you so much!...

Use the convolution theorem to find the inverse Laplace transform of the given function. 3 53...

A circular surface with a radius of 0.062 m is exposed to a uniform external electric...

A circular surface with a radius of 0.062 m is exposed to a uniform external electric field of magnitude 1.50 104 N/C. The electric flux through the surface is 73 N · m2/C. What is the angle between the direction of the electric field and the normal to the surface?...
Read question...
1 answer

Which of the following reactions would not normally yield an alcohol? A. Oxymercuration/ de mercuraction of...

A mass M of solid metal at temperature T is put into 3.0kg of water which is initially at 90°C. T...

Please do all :) A mass M of solid metal at temperature T is put into 3.0kg of water which is initially at 90°C. The metal and water are placed in an insulated container The specific heat for water is 4186K of 60°C. The latent heat associated with the solid-liquid transition of the metal is ...
Read question...
1 answer

Considerations in determining if fair value accounting is the best decision for the company?

Considerations in determining if fair value accounting is the best decision for the company?...
Read question...
1 answer

Plant having two types of flower? (a) Monoecious (b) Diocious (c) Hermaphroditule (d) None of these

Plant having two types of flower? (a) Monoecious (b) Diocious (c) Hermaphroditule (d) None of these...
Read question...
1 answer